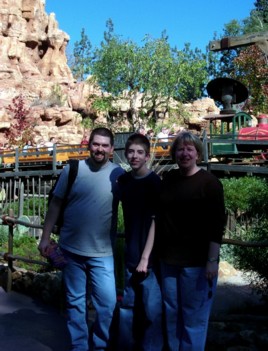 Well, it went nothing like we planned, we were glad to get home, but we still had fun.

We had planned to visit Disneyland the day we flew in. However, we had to fight rush hour to get to our hotel and the park closed at 8pm that day. We settled for dinner at Claim Jumper instead.

We had planned to stay in a Residence Inn so we could have a full kitchen. What we didn’t know was that this particular one allowed pets in all rooms. When David started developing a headache, we moved to a Ramada that advertised that no pets and no smoking were allowed in any rooms. That worked better for us.

The second day was, by far, our big day. We hit Disneyland at about 10:30am. Aside from a short trip back to the hotel for lunch, we were in the park until 11pm. After my obligatory ride on The Jungle Cruise, we found the Indiana Jones Adventure ride to be closed for repairs. We made our way through Pirates of the Caribbean, Haunted Mansion (which was decked out in characters from “The Nightmare Before Christmas” for Halloween) and David’s favorite ride, Big Thunder Mountain Railroad. The Indy ride opened later and we were ten feet from getting in before they had to close it again and shuttled us all out. On our third try later that night, we got to ride and then we rode it again. In fact, we ended up hitting Indy, Thunder Mountain, and Space Mountain (which is much improved) twice during that day. We returned back to the hotel quite exhausted, but we got our money’s worth.

Our last day we took rather leisurely and hung around California Adventure. We did all ride California Screamin’ which was David’s first full-fledged roller coaster. He loved it and wants to do more. I think we’ll have to hit Six Flags during our next visit.

Despite some hiccups and the fact that Stef and I don’t recover as quickly as we used to, we still had a blast. In fact, we were having so much fun we took very few pictures. You can see the ones we did snap here.

One thought on “We Survived Disney”