The only thing worse than someone being intellectually stagnant is someone who is actively running away from knowledge. Apparently, there are quite a few in Washington, DC who are fleeing knowledge in this way. Currently, there are two major bills attempting to move through Congress that would, at best, be serious mistakes and, at worst, be boondoggles that will remake American society in a way that we may not recover from for decades. The health care overhaul is basically an attempt to let the US government become the single payer for all health care in the country. The cap-and-trade bill is an attempt to severely hamstring US industry on the basis of junk science.

Now, the Obama administration will tell you that providing a public option for health care won’t affect your choices. You’ll be able to choose to stay with your current plan (well, that’s not entirely true. If your current plan doesn’t provide the minimum benefits declared by the bill, that plan would have to change.) Of course, if it is cheaper for employers to switch their staff to the public plan, they will do so. And, in doing so, they will remove any options for existing plans. So, Obama qualified himself by saying that the government won’t force you into the public option. That would be your employer’s fault. Never mind that it will be, by far, the most common scenario.

Worse, senators and congressmen have exempted themselves from having to participate in this plan. They get to stick with the impressively sweet deal they already have while the rest of us will be blessed by being better informed so we won’t use treatments that aren’t likely to work. In other words, the government will get to decide if it’s really worth trying that procedure on grandpa. You won’t. How else do you interpret this (from the LA Times):

In a nationally televised event at the White House, Obama said families need better information so they don’t unthinkingly approve “additional tests or additional drugs that the evidence shows is not necessarily going to improve care.”

He added: “Maybe you’re better off not having the surgery, but taking the painkiller.”

In other words, the government will give you better information than your doctor based on what will be cost-effective. So, don’t get sick when you’re old, you may not be worth saving.

Then, on to the environment: the Democrats in the House are hurrying to get a contentious cap-and-trade bill through to limit carbon output over the next several years. Yet again, this bill solves our ills by creating vast bureaucracies designed to control key aspects of the economy and, therefore, aspects of your life. Minority Leader John Boehner created this graphic showing how the bill is intended to work. Let me know when you’ve figured it out (click to see the full-size image): 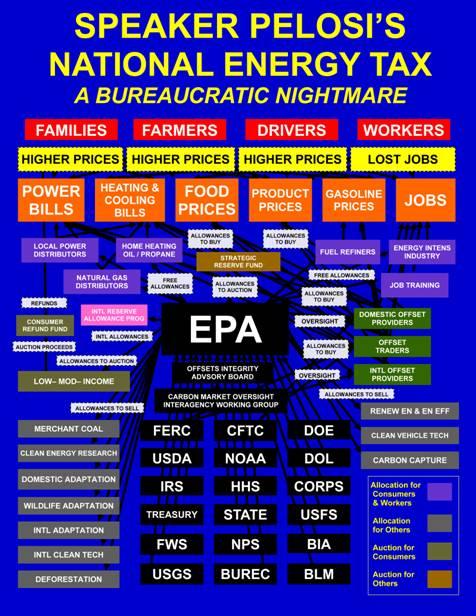 These are serious intrusions into our lives. These will impose huge taxes on each and every one of us (don’t believe the “tax the rich” rhetoric because there aren’t enough of them. Don’t believe the “polluters will pay their share” rhetoric because all companies pass cost increases on to the customer.) This is, flat out, terrible legislation and will cripple our economy when it’s already in a bad way.

Now, the title of this post is “Behind the Times”. I give you all of this information simply to note that we aren’t the first country to try nationalized health care nor are we the first to try to limit carbon emissions. With a fairly simply review of nationalized health care plans in Europe and Canada, it’s easy to see that the result is that everyone has access to sub-standard healthcare. Lines are long. Doctors are fewer. Mortality rates go up (due to the delays and denials of service). Innovation even goes down. This will not only give us bad healthcare, but it will cripple the industry such that it will take years to recover even if the legislation is reversed.

And, in an even more stark case, countries are realizing that cap-and-trade is a terrible idea based on highly disputed science. The Wall Street Journal has an opinion piece by Kimberley Strassel that sums it up. She makes the point that the “consensus” is collapsing:

The collapse of the “consensus” has been driven by reality. The inconvenient truth is that the earth’s temperatures have flat-lined since 2001, despite growing concentrations of C02. Peer-reviewed research has debunked doomsday scenarios about the polar ice caps, hurricanes, malaria, extinctions, rising oceans. A global financial crisis has politicians taking a harder look at the science that would require them to hamstring their economies to rein in carbon.

Strassel tells the story of an Australian legislator who came to America on a fact-finding mission to confirm or deny the need for carbon management legislation. He met directly with President Obama’s special assistant on energy and the environment, Joseph Aldy, and challenged the team to address the controversy. They, apparently, were unconvincing as the Australian went home and voted against the cap-and-trade bill.