I’m sorry. I just don’t buy it. I read President Obama’s comments from his press conference last night (sorry, I just have a hard time listening to him) and I am shaking my head. The language is sounding near-Orwellian. Just last week, we heard Vice President Biden say this:

“Now, people when I say that look at me and say, ‘What are you talking about, Joe? You’re telling me we have to go spend money to keep from going bankrupt?’ The answer is yes, that’s what I’m telling you.”

Then, the President said this last night:

This debate is not a game for these Americans, and they can’t afford to wait any longer for reform. They’re counting on us to get this done. They’re looking to us for leadership. And we can’t let them down. We will pass reform that lowers cost, promotes choice, and provides coverage that every American can count on. And we will do it this year.

Now, remember that the President is discussing a plan that, as currently described, will create this (click the image to see it full-size): 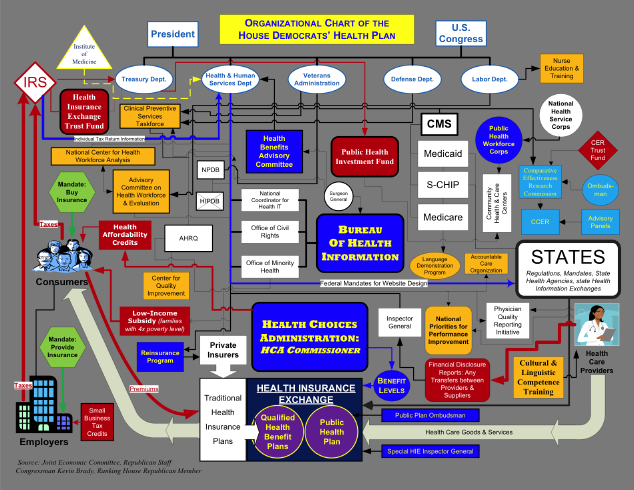 How does any coherent human being describe an organization like this run by the US government as a way to “lower costs” and “promote choice”? The whole argument is based on the idea that central planning of the entire health care system of this nation will make the system more efficient and more cost-effective. I seem to remember another superpower that thought central planning was the way to go. It didn’t work out for them. I just find it hard to believe that any government agency can cause something to get cheaper. You can’t legislate the laws of economics. The costs have to get paid. Prices only go down when there is choice and competition. Government can only limit choices and lower competition. It cannot artificially improve either one. It’s best bet is to get out of the way and let the market provide the solutions.

When I get this deep into a complex issue, I usually back up and start at the beginning by asking, “What problem are we trying to solve?” It’s easy for the solution to take on a life of its own and lose track of the original problem. So, what is the problem here? Well, according to the President it’s about providing coverage for the “47 million Americans” who are currently uninsured. Who are these people?

Professor Armentano concludes that, with some reasonable estimates, the number of chronically uninsured is closer to 8-10 million. This is roughly three percent of the population. Is it really worth radically disrupting the entire industry and the vast majority of the population that is sufficiently covered to try to gather up that small number? Sure, these are people who need help. Sure, the industry as a whole needs help, but central planning, higher taxes, bigger deficits, more debt, and decreased liberty are not the solution here.

Human nature is to do what benefits yourself. Instead of building a huge bureaucracy to force people to do what isn’t their natural inclination, it is better to make it financially beneficial to do the right thing. Make the payment and the services more closely related. That will cause the patient to shop for the best deal. Remove the danger of a good doctor being wiped out by a lawsuit, and he will make better decisions about what tests and services are necessary and which are not. Further separating the service from the payment will incline people to overuse the services because they feel “free”. That will not lower costs.

The kicker here is the vast damage this kind of legislation can do to the industry. With some legislation, the laws can just be repealed and society can return to its previous state. This legislation will likely drive private insurance companies out of business, or at least change them dramatically. So, even if this monstrosity is repealed, the landscape will be changed and we could be in a world of hurt for some time.

This is something that needs to be prevented now. We can’t afford to “wait and see” and hope to clean it up later.