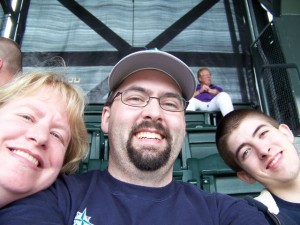 We have come to the conclusion that this is the year God started a major transition for all three of us. He’s been preparing us, moving us, and giving us glimpses into our future. That brings excitement and anxiety all at the same time. Nonethless, we are in process. There’s no stopping it now.

David is currently enjoying his Christmas break in the middle of his senior year of high school. He can see graduation on the horizon and we are having to actually plan the events surrounding it. It’s no longer some far future event, but is now only months away. David continues to drum for his youth group from time to time and has become a mainstay of the AV staff on Sundays by either running the projection for the main service or the overflow room almost every week.

He plans to continue his education at Portland Community College in the fall and begin narrowing his options for the future. We certainly hope he’ll be able to find his way to a career that involves his love for music. 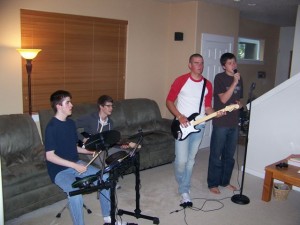 Stefanie began to stretch her boundaries early in the year when she did what would have been unthinkable only a few months previous. She felt the urge to begin putting her thoughts in print and started a blog called Steffi’s Lighthouse. It began as a way of discussing her emotional and spiritual growth, but it has turned into a way for Stefanie to share the truths that God is revealing to her. That, in turn, has helped touch the lives of many of her friends and other women who read it.

Stefanie’s further transitioning came in the form of two opportunities at church that literally arrived on the same day. She was invited to participate in a training course based on the book Kitchen Table Counseling. She was also asked to help lead one of many small groups embarking on a seven week study of A Shepherd Looks at Psalm 23. She did both despite her trepidation and can’t say enough about the experience. She has helped encourage and support many women since then and we have no doubt that it’s only the beginning. As David’s homeschooling ends, God clearly has plans to use Stefanie as a leader, mentor, and counselor of women in the church. 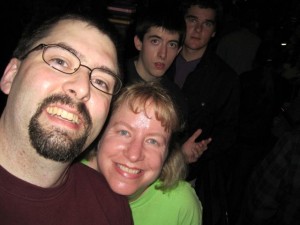 Wyatt has been involved with computer support at the church for quite a while now, but he was still surprised when the Pastor of Administration asked to meet him for lunch. It turned out that Wyatt was asked to be a Deacon at the church with shared responsibilities over the computer support, networking, and Internet services. Although our church now has over 4,000 members, the small staff was still working with a mishmash of volunteers to do all the work for events, services, childcare, and the rest. Naming Deacons was the next step in organizing those volunteers and the work that needed to be done. So, Wyatt was part of a group of seventeen men named as Deacons in front of the church in September. You can see a video of the event here. Of course, all this really means is that Wyatt can’t quit volunteering now.

Wyatt had another transition that has turned out to be a big adjustment for all three of us. After seventeen years of working on salary for four companies, Wyatt accepted an offer to be a contractor for Art & Logic in August. He liked the idea that he’d be spending the majority of his time writing software again, but one of the biggest benefits is that he works from home. He has since picked up contracts from other customers as well, but in all cases, he does his work from home on his own schedule. This has allowed him to be much more involved in David’s schooling and has generally been more involved in the family’s life. Having him home as certainly changed our dynamic, but it’s been a good thing for us all.

As for milestones, Wyatt and Stefanie quietly celebrated their twentieth anniversary in August. We didn’t have a big party or exchange gaudy gifts, but we did discuss memories from the last twenty years and shook our heads at how quickly we’ve arrived here. Looking back, we can see with such clarity how God used our circumstances and events to shape us and prepare us for where we are today. That recognition has tightened the bond we have and we eagerly look forward to what He has in mind for us in the future. 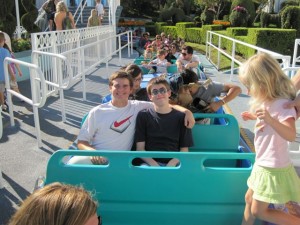 Finally, we did squeeze in a little fun in mid-October with a quick trip to Disneyland. The goal was to hit the area in the fall to avoid the vacation crowds and find some temperate weather. The crowds were reasonable, but we managed to arrive just as the remnants of a Pacific typhoon were passing through. We had high humidity and 90 plus temperatures for the entire trip. In October. Yike.

That didn’t prevent us from having a good time, though. David brought along his friend, Micah, and it allowed us to do some fun things together and to split up when appropriate. A plan that succeeded in providing fun for all and a very enjoyable trip.

So, here we sit having passed some milestones and feeling like we’re all in a very different place than we were a year ago. The unknown future, though, does not frighten us or fill us with anxiety, but generates excitement for where the adventure will take us next. And, most of all, we can’t wait to embark on that adventure with each other and with God.

If you’ve stuck it out this far, then you must be family or obsessive friends. Regardless, we love you all and wish you all a Merry Christmas and a Blessed New Year. Stay in touch via email, Facebook, and even follow Wyatt on Twitter. We promise to reply or at least make a snarky comment about your status update. 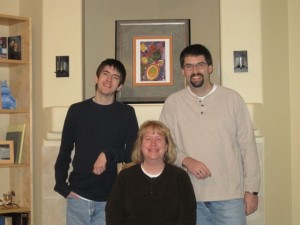